🐵 Frank Welker as Abu, Rajah, & The Cave of Wonders

👑 Navid Negahban as The Sultan

🧞‍♂️ Will Smith as Genie

The next Disney remake I’m reviewing is Aladdin from 2019. This was my 2nd viewing:

• Co-directors John Musker & Ron Clements have confirmed the peddler who tells the story of Aladdin in the original movie is Genie as a human. Continuing with a similar backstory, the remake opens with Will Smith as a mariner sailing a ship alongside an unidentified woman & two kids. He begins his story of Aladdin with the song Arabian Nights, same as his animated counterpart. In the 1992 version, Robin Williams had a voice double for this song because the specific style & high notes were beyond his ability. In the remake, Will did all the singing, & I think that was a mistake for this song. It obviously stretched him, & the patchwork done with effects is too robotic. Also, his personal style doesn’t mesh with the song; it sounds like a boy band member giving “Arabian” music a try. Like Emma in Beauty and the Beast, Will’s heavily edited singing voice opens the movie & is therefore one of the first things my mind retains. That is so unfortunate because it could’ve easily been avoided. Even if Will had started the song & a voice double finished it, that would’ve been a huge improvement without affecting Will’s overall performance. Disney keeps making the same mistakes with these remakes, & that is truly annoying. 😑

• The sets and costumes are a conveyor belt of color, & I cannot get enough of it. During my college internship, I had the pleasure of attending a few Indian weddings as a photographer’s assistant; they were always such colorful & vibrant events. This movie reminds me of those experiences so I definitely see the inspiration taken from India. 🇮🇳

• Let’s talk about Jasmine’s impeccable wardrobe. There are nods to her classic outfit with teal accents, teal jewelry, & an updated version with added bling & peacock feathers worn during the party scene which leads into A Whole New World. Other than that, everything is brand new, & I really, really, REALLY like the fresh interpretation. Two things to mention: Number one, 2019 Jasmine does not bare her midriff like 1992 Jasmine which is mirrored by 2019 Aladdin not being shirtless. Number two, Jasmine’s outfits are inspired by her mother’s homeland Sherabad which is a fictional country in South Asia. Round of applause for Master Costume Designer Michael Wilkinson! 👏🏻 👏🏻 👏🏻 👏🏻 👏🏻 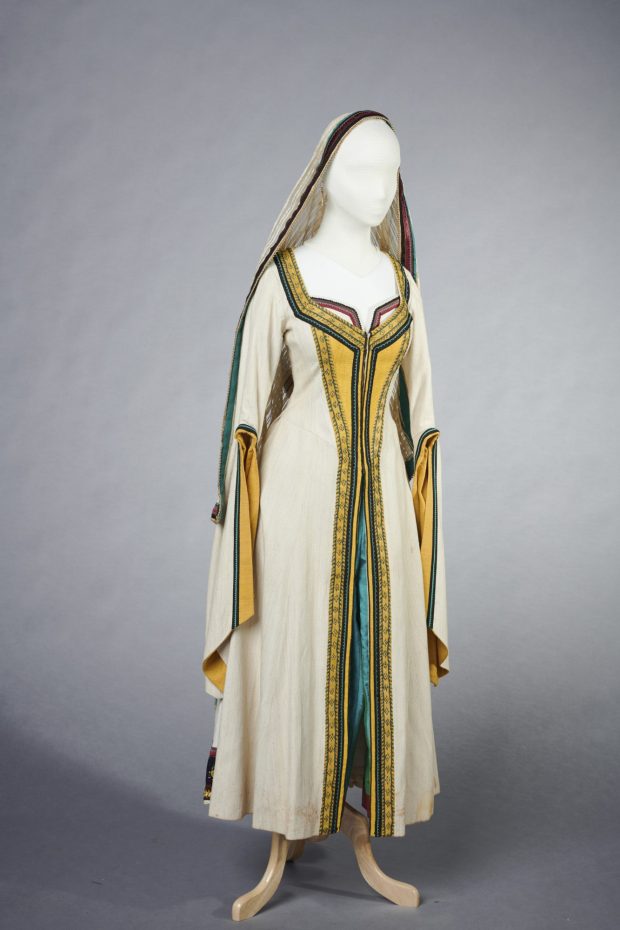 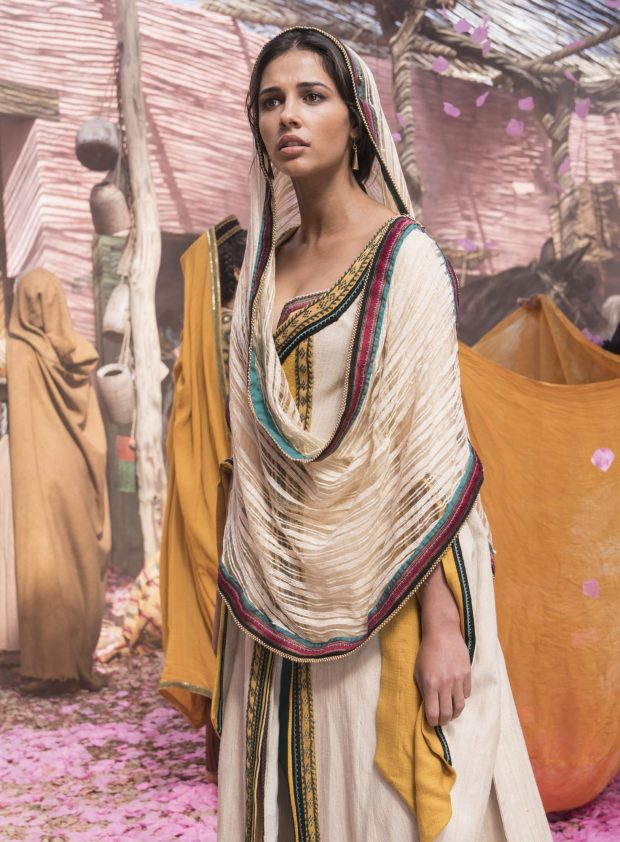 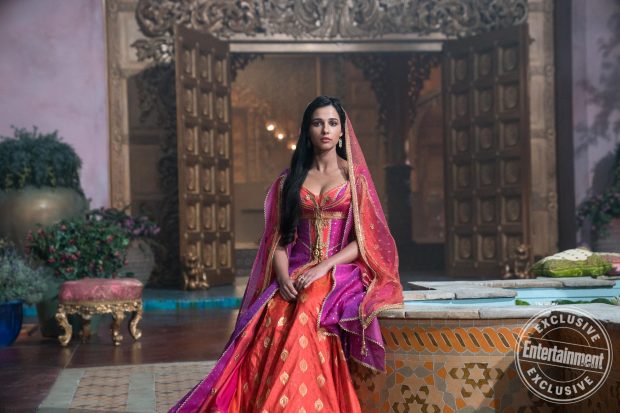 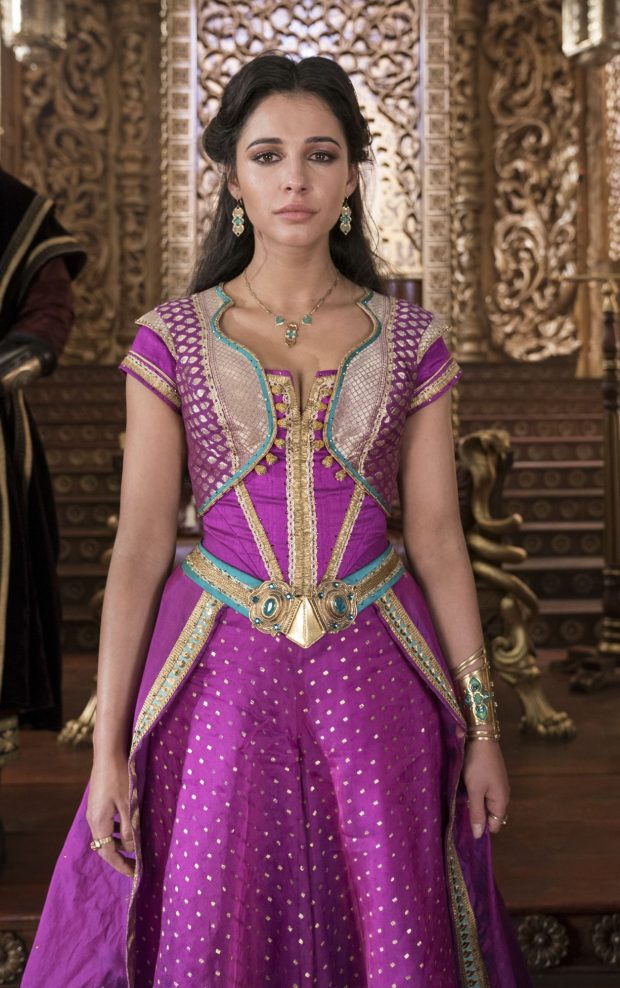 OOPS! I guess you’ll have to watch the movie to get a better look at Jasmine’s wardrobe including her STUNNING white wedding dress with gold & teal accents. It sparkles all over & embodies the song A Whole New World. 😍

• One of my favorite scenes from the original movie is Aladdin giving up his loaf of bread to feed two hungry children who have nothing to eat. The remake version isn’t as drawn out or emotional, but he does give a bag of dates to two hungry children. Still a sweet gesture! 🥰 Abu hides one date for himself under his hat. 😂

• I like the One Jump Ahead musical number & Mena Massoud’s singing voice, but the addition of drums is odd. It might sound better on its own, but within the scene it’s the wrong puzzle piece. Stay tuned for more on this subject . . .

• I love the brand new character Dalia brought to life by Nasim Pedrad. I’ve been a fan of Nasim since her Saturday Night Live days. She is an absolute treasure, so beautiful & so hilarious. I love that she wasn’t just a throwaway side character. Her humor was utilized well, & she got a sweet love story of her own with Genie. Their awkward interactions are equal parts adorable & hilarious. HERE FOR IT! 💘

• Throughout the movie Genie’s CGI body doesn’t look too bad; what actually falters from time to time is the face, sometimes looking a bit too fake. On the positive side, Will’s singing voice improved significantly in Friend Like Me & Prince Ali, two songs that suited his style & voice much more than Arabian Nights. Speaking of style, I appreciate that Will made Genie his own instead of attempting to copy the late, great Robin Williams. Those are shoes that cannot be filled so it was always going to be the smarter choice to fill his own shoes. I love Will Smith for who he is so I’m glad we got his personal interpretation of this beloved character.

• The first time I watched this movie, I was skeptical up until the desert scene when Genie starts brainstorming outfit ideas for Prince Ali; that’s when the movie really started to click for me. This time around, I enjoyed it from the very beginning. I mention this because it’s always a good idea to give things more than one chance. Aladdin is my second favorite Disney movie so I went into the remake with high standards & expectations. After that first plunge, I relaxed & was able to see it as its own movie. If you don’t like something the first time, in this case a Disney remake, I recommend you give it a second chance just to be sure.

• Subtle joke alert! When Genie is trying different outfits on Aladdin, one of them includes a large, turban-style hat. Aladdin comments on it being so big, & Genie replies “No, that is not a big hat.” A little later during Prince Ali’s grand entrance into Agrabah, Genie is seen wearing a ridiculously huge turban. Punchline! 😂

• Mena & Will have great onscreen chemistry. Their banter flows so well that you almost forget they’re in a movie. The scene when they’re first introduced to the Sultan & Princess Jasmine is especially hilarious. If you don’t cry from laughter while watching it, there’s a good possibility you have no soul. 😂

• I enjoyed most of the musical numbers but am especially fond of the spectacle in Prince Ali & the Bollywood-inspired choreography at the party following Prince Ali’s entrance into the city. Remember the beautiful colors & costumes I mentioned earlier? They make the dancers look even more gorgeous, like the fast moving images inside a kaleidoscope. *sigh* 🥰💕

• When Genie appears on Jasmine’s map, he creates a castle & names it Fantasyland. He then adds Adventureland with a pirate ship  & Tomorrowland with a rocket ship. Those places sound very familiar. Wink wink! 😉

• I like Mena’s singing voice, but something sounds off in A Whole New World. He sounds too heavy in a big ballad moment that should sound light & grand. Naomi is fantastic, & Mena sounds much better after she joins in. Remember the drums from One Jump Ahead? They’re back to cause more trouble. Once again we have drums that weren’t in the original song,  & they do not work. I hate to say this, but they sound like the generic music samples that come with a keyboard. Dare I say they age these classic songs, making them sound too much like a concert from decades ago. 😳

• The scene in which Jafar’s staff is destroyed & his spell over the Sultan exposed felt odd, like the whole sequence happened too quickly. This might sound nit-picky, but something definitely felt off with the pacing. It may have something to do with me not being a fan of 2019 Jafar. This is a controversial opinion so buckle up. First of all, I think Marwan Kenzari is a bit too young. Part of what makes Jafar so creepy in the 1992 version is his pursuit of Princess Jasmine despite being close to the age of her father, the Sultan. I understand why an updated movie wouldn’t go too far with that storyline, but I still think he should’ve been at least ten years older. Second, he comes across as annoying rather than intimidating, like a young athlete who is too cocky & ambitious for his own good. On top of all that, his voice as a powerful genie isn’t convincing, & his CGI form is questionable. Animated Jafar as a red, evil genie was terrifying! Unfortunately young, updated Jafar wasn’t for me.

Fun Fact: The original voice Jonathan Freeman had to adjust his Jafar voice so he would be seen as calm & calculating, a real threat rather than just an irritable grand vizier. I think this is where Marwan’s version got stuck; he never moved past being irritable or irritating.

• The first time I watched the remake, I fell head over heels in love with Speechless but thought the second part fit into the pacing of the movie much better than the first part. The second time around, I thought both parts were just fine. Naomi is definitely the strongest singer in the cast. My fellow Lemonade Mouth fans & I are OGs; we knew she would kill it as Princess Jasmine the minute the casting was announced. 🎶

• I cannot believe I didn’t mention this earlier in my review! Abu is mischievous & adorable, & I love that the Magic Carpet is his best friend. Their reunion & hug after Genie repairs Carpet is sooo cute. 😭💕

• Mena & Will’s onscreen chemistry strikes again! They did a fantastic job with the third wish scene. It gave me all the feels & made me cry. If we’re getting technical, it’s behind the original scene but only by a little bit. 😭

• By now you should’ve figured out that after Genie is set free, he marries Dalia & sets sail to explore the world. In the beginning of the movie, what we saw was him telling the tale of Aladdin to his daughter Lian & son Omar while Dalia moved about the ship.

• Shout out to Navid Negahban! He was fantastic as The Sultan. His version has more depth & less silliness. The scene at the end between him & Jasmine was emotional & so well done by both actors. After his wife died, the Sultan sheltered Jasmine from the world to protect her. He eventually realizes her ambitions are more important & proudly names her the next Sultan. Sultana Jasmine of Agrabah!

• First of all, I love the cast dance party that opens the closing credits. Second, the remix of Friend Like Me featuring Will Smith & DJ Khaled is a JAM. See what I did there? Wink wink! 😉

❓ Original or Remake: I love many of the updates that were successfully done in the remake, but the 1992 movie will always have a special place in my heart. Original!

Beauty and the Beast 2017 | Movie Review