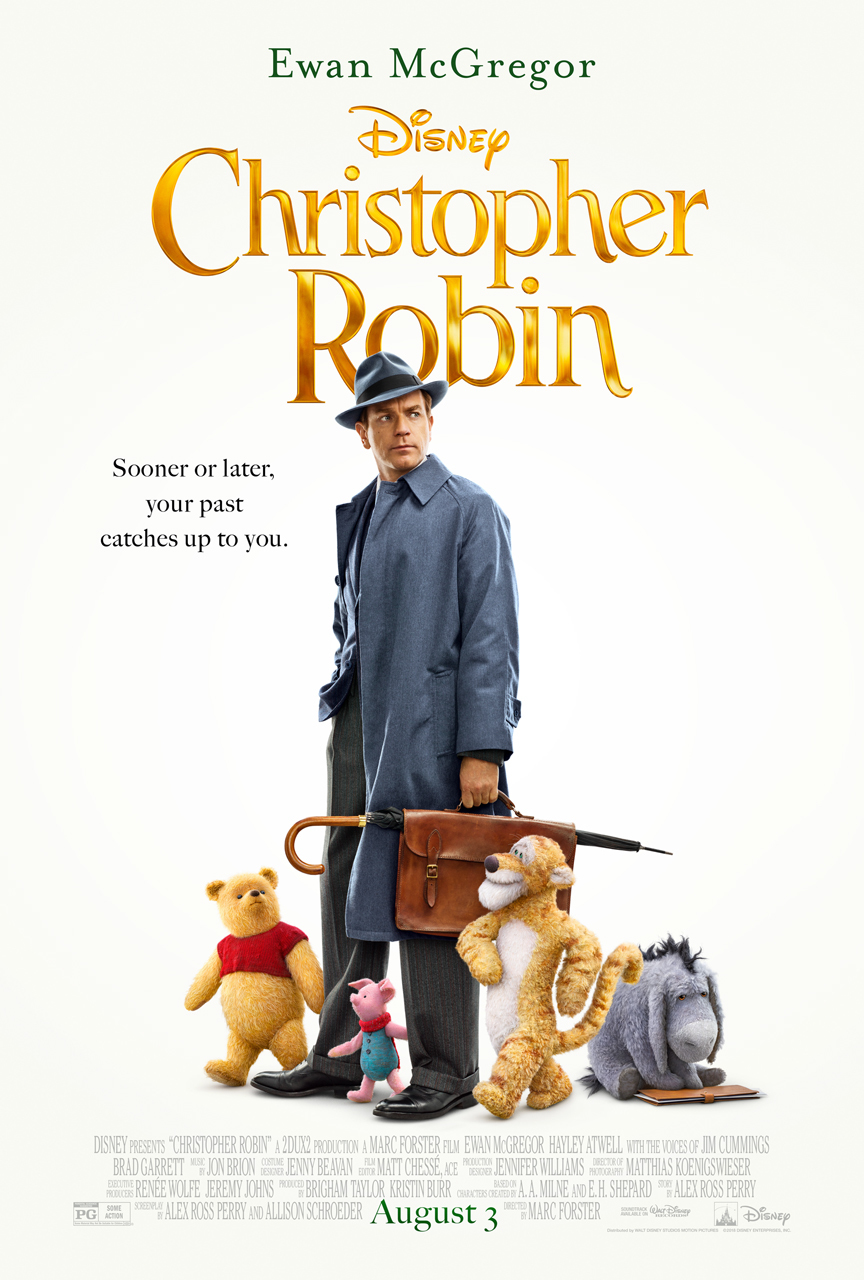 🐻 Jim Cummings as Winnie the Pooh

📰 Mackenzie Crook as a newspaper seller

🚔 Matt Berry as a policeman bobby

🚖 Simon Farnaby as a Taxi driver

Today is an interesting day because I’m reviewing a last minute addition. I never once thought to include Christopher Robin from 2018, but the internet tells me it’s considered a Disney remake. It’s very different from the Winnie the Pooh cartoons because it follows Christopher as an adult. It’s more of a sequel than a remake so that’s what I’m classifying it as. This was my third viewing:

• Themed castle intro alert! Trust me when I say this one is unique & adorable. It starts out like normal with the camera moving over Sleeping Beauty’s castle as fireworks go off. As the front of the castle comes into view, it transitions into an illustration which leads right into the opening credits presented as the pages of an illustrated Winnie the Pooh book. UGH! Love it! 💕

• This film introduces five new voices to the Hundred Acre Wood: Nick Mohammed as Piglet, Peter Capaldi as Rabbit, Sara Sheen as Roo, Sophie Okonedo as Kanga, & Toby Jones as Owl. Brad Garrett previously voiced Eeyore in a video game. This is a monumental task, taking on such iconic characters, & these wonderful actors did an incredible job. 👏🏻 👏🏻 👏🏻 I don’t mind a new voice actor as long as they do the character justice. However, I think it was the right decision to bring back the one & only Jim Cummings as Tigger & Winnie the Pooh. This movie relies heavily on the nostalgia of the audience, & bringing back a familiar voice we all grew up with was a smart decision. The first time Pooh opens his mouth & speaks, it feels like a comfort blanket has been wrapped around you, & all is right with the world. 💕

• I cannot say enough good things about the character designs. It truly feels like I’m watching Christopher Robin play with his stuffed animals. The talking looks smooth, & their adorable little faces show so much emotion. Their home in the Hundred Acre Wood is equally adorable, like a miniature fairy garden we get to see up close.

Fun Fact: Not all the animals are stuffed animals! A.A, Milne, the creator of Winnie the Pooh, was inspired by the toys of his son Christopher Robin Milne. Eeyore, Kanga, Piglet, Pooh, Roo, & Tigger are all stuffed animals. Owl & Rabbit, however, are real animals, characters added to the Hundred Acre Wood from A.A. Milne’s imagination. In the animated shorts & movies it’s hard to tell the difference because everyone is animated the same way, although the real animals never mention their stuffing or need their tail pinned back on with a nail. In this movie it’s much easier to separate the animals from the toys with seams & stuffing.

• The movie opens with a Hundred Acre Wood tea party which is a normal occurrence in the Winnie the Pooh books & movies. There is also a brief glimpse at a game of Poohsticks between Christopher & Pooh on the bridge.

• Eagle-eyed fans will catch the significance of the early chat between Christopher & Pooh. I haven’t read all the books so I’m not sure if it’s happened in that realm, but the exact same conversation takes place at the very end of the movie Pooh’s Grand Adventure: The Search for Christopher Robin. Christopher is going off to school & asks Pooh if he’ll always be there for him, even when he’s 100. Pooh asks how old he’ll be then, & Christopher tells him 99. He then promises his human friend he’ll always be there, forever & ever.

• Keep the nostalgia coming! We get an updated version of the classic scene in which Pooh wakes up & does his stretching exercises in front of a mirror before his morning honey.

• At the train station Pooh asks Christopher for a balloon which is yet another easter egg. A classic Winnie the Pooh tale involves the silly old bear trying to float up to a beehive using a balloon to get more honey because he’s run out. In the 1926 book & 1966 featurette, the ballon is blue. In Christopher Robin & the 2011 movie Winnie the Pooh, the balloon is red & not used to get honey.

• While crawling through the tree doorway to the Hundred Acre Wood, Christopher Robin gets stuck & says “So this is what this feels like.” He’s referring to Winnie the Pooh who gets stuck all the time. Remember when he got stuck in the entrance to Rabbit’s house? Classic!

• When Christopher pretends to fight a heffalump to prove his identity to his Hundred Acre Wood friends, it’s very symbolic that he pounces on & stabs his work briefcase as “the enemy.” His job drained the imagination out of his life & took him away from what matters most: family! Work isn’t bad, but it should never consume you.

• Pooh and his friends declare they’re going on an “expotition” to London to return Christoper Robin’s important papers. This is a reference to the A.A. Milne story “Expotition to the North Pole.”

Pooh: “And the game is called Say What You See. You first, Piglet.”

• At the beginning of the movie, young Christopher wears a blue gingham top & blue shorts that resemble an outfit from the book “The House at Pooh Corner.” At the end, adult Christopher wear a red sweater vest & blue shorts that resemble the school uniform from Winnie the Pooh. I think he wore a similar outfit before the 2011 movie, but I can’t remember which TV episode or movie it was in.

• After Christopher Robin convinces his boss to give the Winslow Luggage employees more vacation time, a mid-credits scene shows them at the beach along with Eeyore, Piglet, Pooh, & Tigger. This scene is even more meaningful when you know the name of the man who’s shown playing piano. His name is Richard M. Sherman, one half of the legendary Sherman brothers who wrote music for Disney classics such as Mary Poppins, The Aristocats, The Jungle Book, The Many Adventures of Winnie the Pooh, & The Parent Trap. He is playing Christopher Robin, an original song written for this movie. 💛

💬 Closing Thoughts: Some might think the real world scenes are too bleak for a Winnie the Pooh movie. For example, Christopher in boarding school, going off to war, becoming a workaholic, etc. In my personal opinion, those things work in favor of teaching a lesson about growing up but never losing the wonder of childhood. That’s what Pooh & his friends represent in Christopher Robin’s life as well as the lives of adults like me who grew up with them. Don’t ever stop taking trips to the Hundred Acre Wood!

Beauty and the Beast 2017 | Movie Review