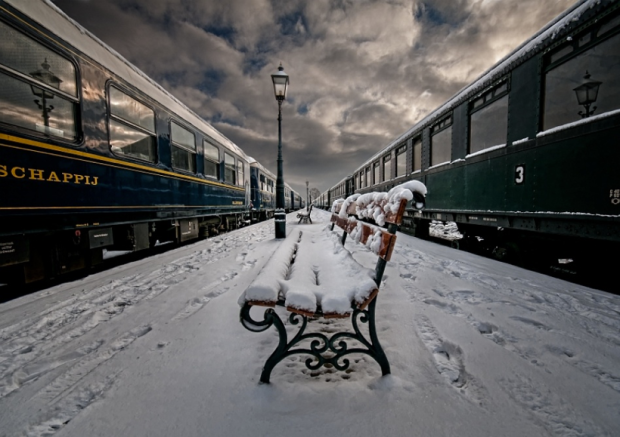 This was meant to be posted on December 26th, but alas it was not.  C’est la vie!  I am about to take you on a journey through my family’s Christmas adventures hence the photograph reminiscent of “Polar Express” courtesy of Jeannette Oerlemans.  I must start with Christmas Eve because we committed the ultimate sin: opening presents.  I felt serious anxiety and guilt after doing so.  However, after some research, I realized that many people open presents on Christmas Eve.  Definitely did NOT know this!!  I feel a bit better but do not plan on making Christmas Eve present-opening a tradition.  It feels sacrilegious!  Moving on to December 25th, 2014.  Since the presents were already opened (Oh the shame!!), we slept in a few hours before getting ready and venturing into the outside world.  We saw our annual Christmas movie which was “The Hobbit: The Battle of the Five Armies.”  Much anticipated and sooooo good!!  A satisfying end to an amazing trilogy.  Fun fact: Each installment of the Hobbit trilogy has been our Christmas movie for the past 3 years.  After the movie, we headed over to our Christmas lunch/dinner destination: Sizzler.  I know, I know.  Holiday meal of champions!  In our defense, not much was open, and we are not able to cook in our current living space.  After the 2 1/2 hour movie, we were starving and ready to chow down.  Bad news.  Sizzler was PACKED.  Apparently that was not a very original idea.  We drove around the shopping center praying that something else was open.  Guess where we ended up?  Eating Mexican food while listening to un televisión.  My parents and brother were almost done with their food by the time my torta came out.  I was pretty annoyed, but it was HUGE and very delicious.  We ended the day in pajamas watching “The Santa Clause” 1 & 2 and eating Christmas goodies from grandma.  Christmas 2014 was definitely unconventional, but it was fun day spent with family.  I will never forget it!

Blogmas 2014 is now officially over.  See you next year! Stay merry readers.  Only 359 until Christmas…